One year with residential solar and battery in Melbourne, Australia

Outside of the savings on electricity costs, the installation of solar and batteries – with the right inverter – offers numerous other benefits, too.

When you consider cities in Australia that might be best to implement a solar and battery solution on a residential dwelling, Brisbane likely comes first to mind. Sydney would certainly be high on the list, and data tells us Canberra is also an excellent option in terms of solar irradiation.

And then, there’s Melbourne, famous for its “four seasons in one day” weather, its gloomy winters and, well, anything but continuous sunlight. Melbourne would likely sit comfortably at the bottom of any list for sunlight hours in Australian cities.

As the Country Manager for FIMER Australia & New Zealand, I work in the solar industry and live in Melbourne. Last year, my family invested in solar PV and batteries. We wanted to reduce our electricity bills by becoming more self-sufficient and less reliant on using energy from the grid.

It’s been twelve months since the installation and I wanted to share my insights into how my solar and battery installation has performed, and what changes we have noticed across four seasons.

Here’s what I have learnt.

Which system did I have installed?

The solar PV array installed on my Melbourne house is a five-kilowatt system. I am using Canadian Solar 350W panels which feeds into a hybrid inverter called the REACT 2.

My REACT 2 battery has a total of 12 kilowatt hours (kWh) storage, which is the largest we offer. Depending on the time of year, the solar PV and batteries together can provide up to 24 hours of household power. But the batteries come in 4kWh sizes, so you can begin with one, then add more as your needs change.

I didn’t have any solar to begin with, so the entire system was installed from scratch. This took less than one day, and even I was surprised at how simple it was. We have a very good, north-facing aspect, which is ideal for a solar system as you get the full sweep of the sun.

What does it cost and save?

It’s very difficult to define cost, as it depends on the size of the system, the complexity of the install, where you live and if there are any state subsidies, etc. But very generally, on top of the solar system, you’re likely looking at around $12,000 to $14,000 for a quality battery system of this size before subsidies and rebates. Pricing is coming down, but it is still an investment. Typically, it will pay itself off over 10 to 12 years, depending on where you live, your energy usage and what you paid.
What were my reasons for the investment? They were twofold. One was that we wanted to reduce our environmental footprint. The other was about reducing our electricity costs, meaning solar by itself wasn’t an option, as no one would be home during the day to utilise the energy. Batteries, however, would charge during the day and when we are at home, at night, during peak energy cost periods, we would be able to run the house for zero dollars.

So how much energy do I save now? 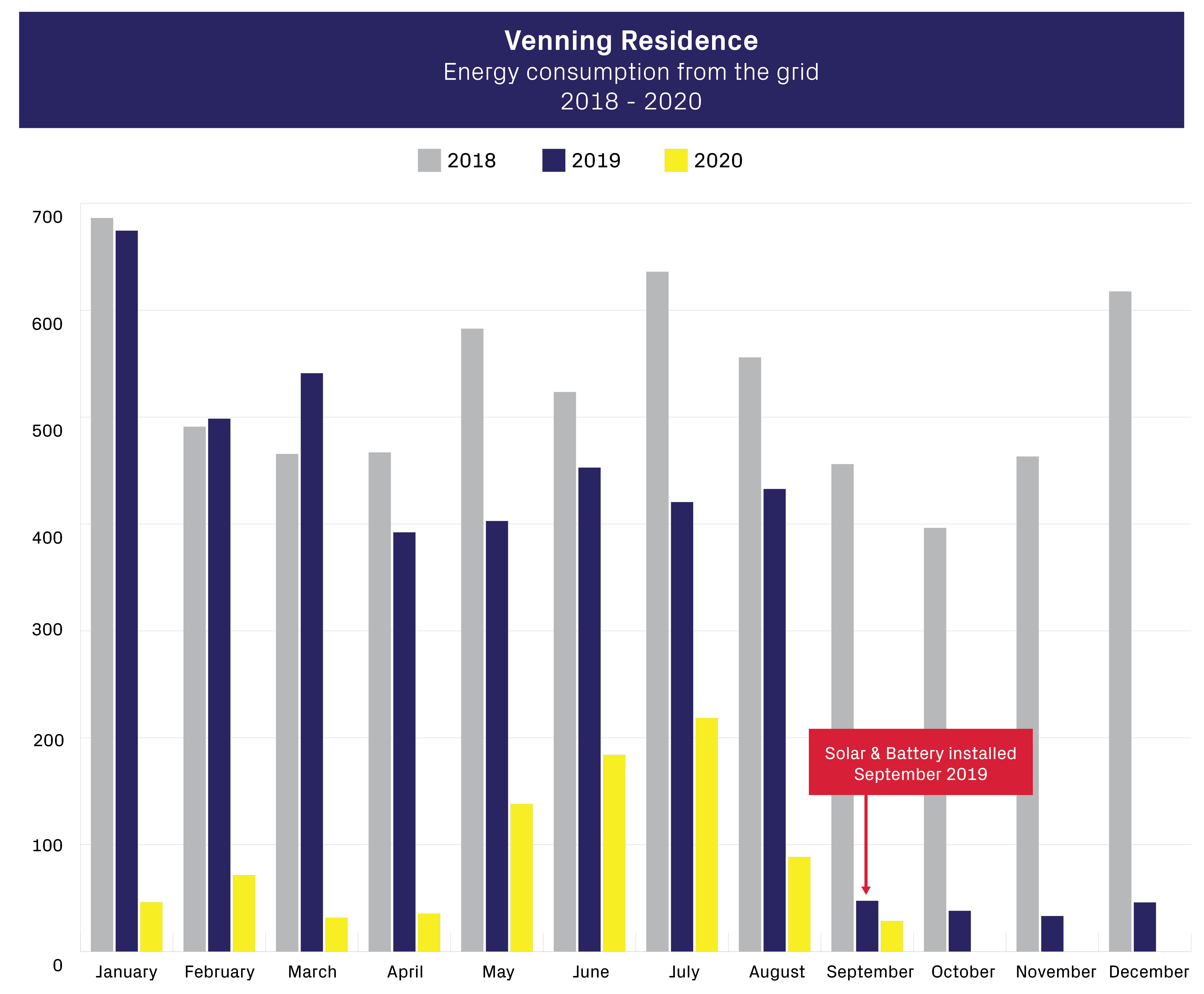 In August last year, before the system was installed, we used 440 kWh of energy from the grid. A month after our REACT 2 system was installed, we only used 40 kWh from the grid. Throughout summer we never went above 40 kWh, except February – which was peak air-conditioning time for us – when we used 70 kWh.
In winter, we used about 50 percent of the energy we were using previously. Our very highest usage was about 220 kWh, compared to 440 kWh the previous winter. And remember, this is during a Melbourne winter.

Overall, the system has generated over 70 percent of all the energy we have consumed since it was first installed which is a great start. 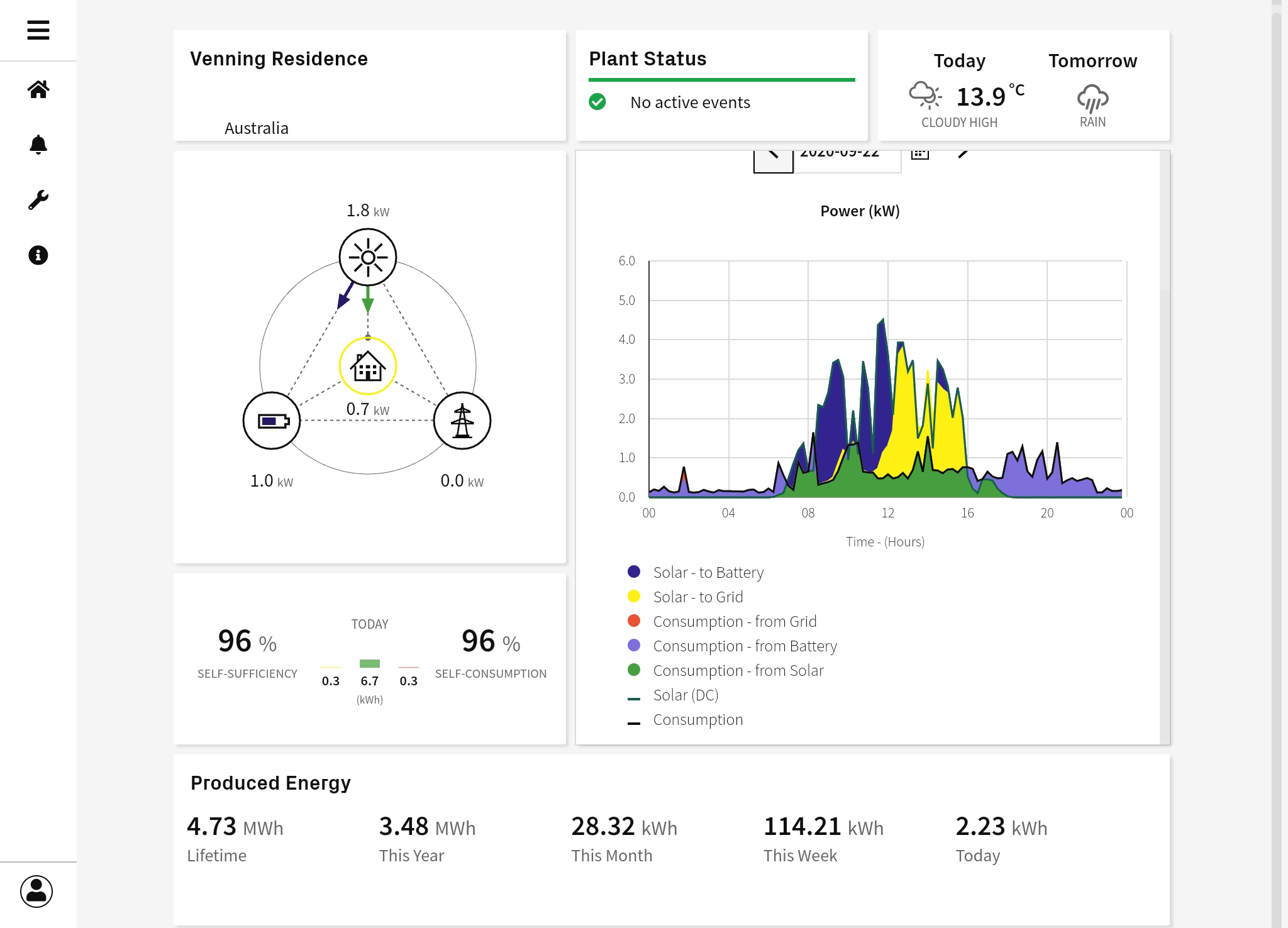 How has it changed our behaviours?

This has become a little bit of an obsession for me, and I have a game with myself to see how self-sufficient we can be, trying to get it as close to 100 percent as possible and lately, I have been able to keep it in the 90-97 percent range most days.

Using FIMER’s Energy Viewer app, I am able to monitor my REACT 2 system in real-time as it is connected to my home’s wi-fi and allows me to see my system’s performance from anywhere and at any time.

I have learnt what time our system generates the most electricity, so our behaviour has shifted to know how best to use our own energy. We don’t get paid much to export our energy to the grid so, for us, it’s worth more to use and store the energy ourselves.

Obviously, if you’re home during the day, then you want to be maximising what you’re using when the sun is shining. We will now deliberately run things like the dishwasher or our washing machine on sunny days when we know there’s excess energy and the battery is charged.

We’ve also made changes to how we use our heating and cooling, as we can now see how much energy we were actually using. We didn’t have this usage transparency before. Now, by making a few tweaks in our usage, we have been able to further reduce our energy consumption. 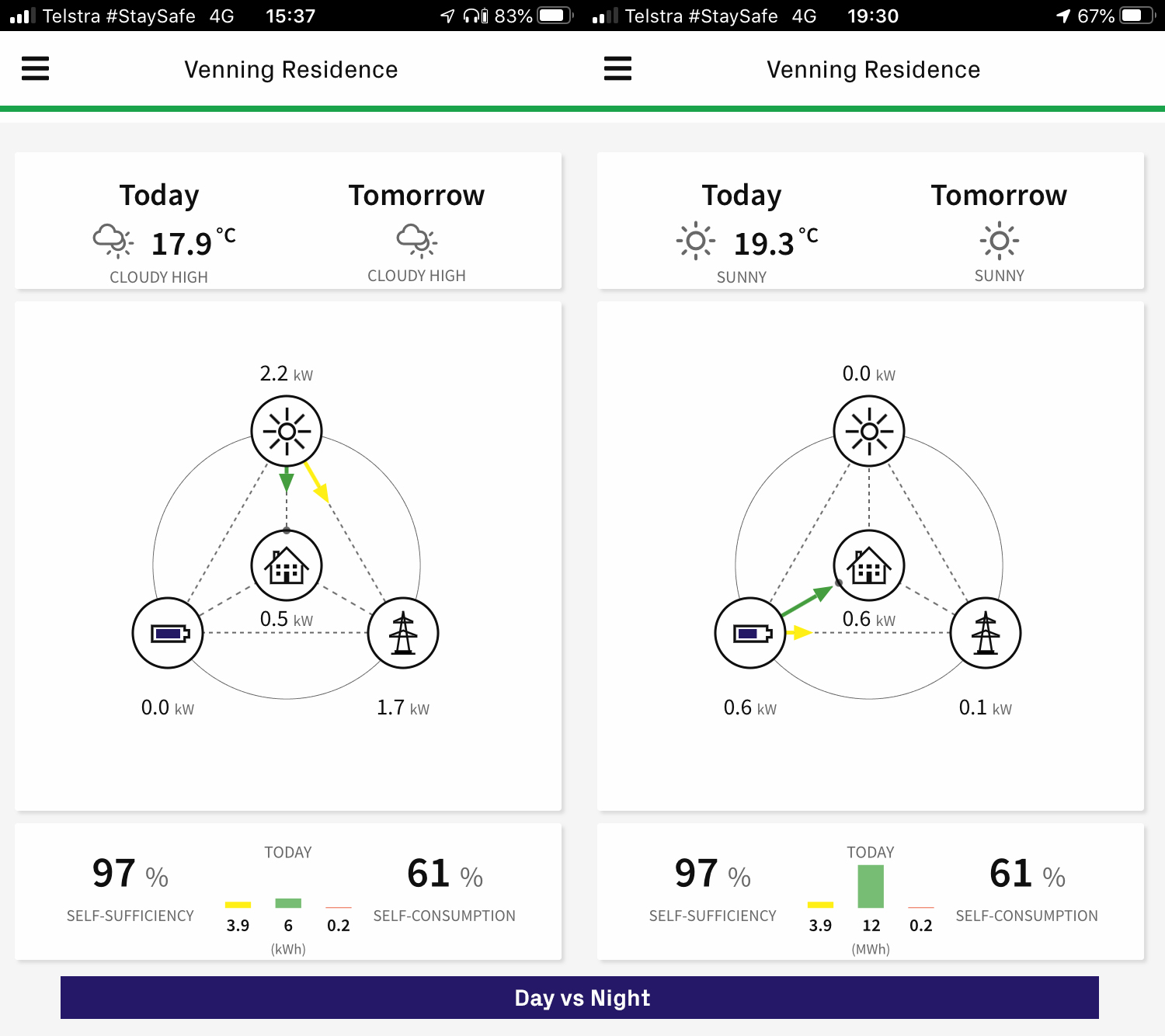 Emergency backup: Does it work in a blackout?

Assuming we have a full charge, which is by far the majority of days (all except the darkest of winter days) as the battery typically charges from flat to full during the day-time, the energy stored in the battery will last our household all through the evening when our energy usage is typically at its highest.

And thanks to an emergency backup function on the FIMER REACT 2, if power from the grid is cut off and the sun is shining or there is energy in the battery, the house will immediately and automatically begin taking power from the solar or from the battery. This is not possible with a normal inverter and it’s not possible on all hybrids, either.
Note, though, that it’s not intended to run every load in your house. There’s only a certain capacity it can supply. Mine is set up to run the refrigerator, oven, microwave and lights in the kitchen, and a couple of power points. It means we’ve got the basics – our food won’t go off, we can cook, and we’ll have power to charge our devices. In this scenario, I would have about 24 hours of energy stored to power the kitchen.

This is a powerful argument for the solar and battery combination, with the right hybrid inverter.

We didn’t get this system thinking we could pay it off in a few years. The value it holds to us is more than financial. There is an emotional value in knowing you’re reducing your environmental footprint, staying immune from energy price rises and becoming far more familiar with your energy usage patterns. There’s also a feeling of security in knowing outages won’t impact your family as they once did.

If a solar and battery system, like the REACT 2, can deliver such an impact to my family in Melbourne, then solar and batteries are definite options for households across Australia to reduce their electricity costs and environmental footprint.

What if you’ve already got solar?

The first is to install a hybrid inverter and battery system (like FIMER’s REACT 2) and connect it to your existing system. Your old inverter will still capture the energy from the panels and convert it to AC electricity, sending it into your house to be consumed or exporting it back to the grid. Any additional energy will be sent to the hybrid inverter and converted back to DC energy, to be stored in the battery. When it is ready to be used, it will be converted back into AC electricity. This option means you will lose some energy as a result of the conversions.

Alternatively, depending on the age of your system, you might want to replace your existing inverter with a hybrid (or ‘battery-ready’) inverter such as the REACT 2. This way, your system will allow you to get the most out of your renewable energy generation and be able to utilise all the features and functionality. 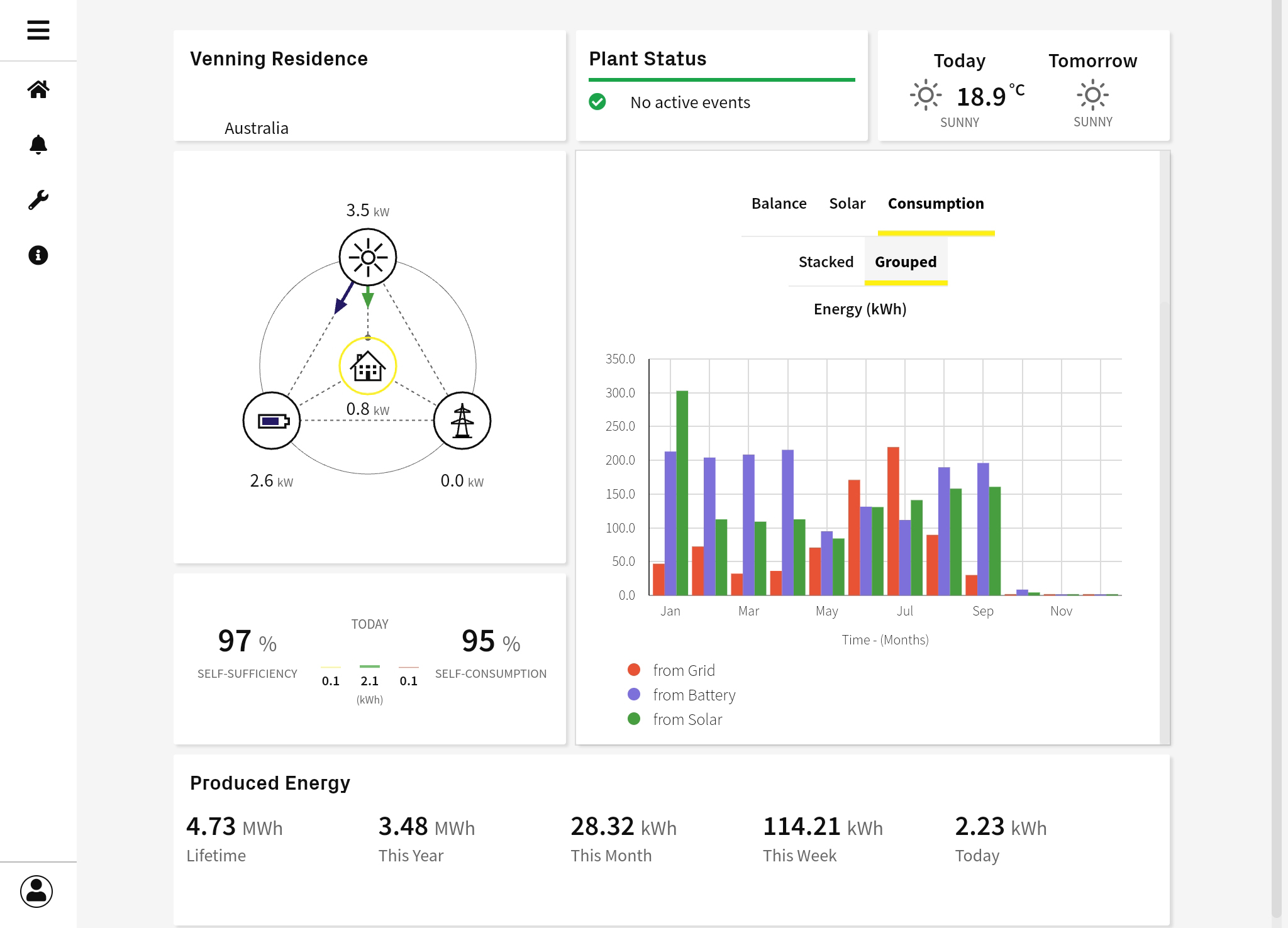 However, no matter what type of solar installation you’re considering, it’s essential to seek accredited, experienced professionals. In Australia, the Clean Energy Council is the body through which all professional solar installers are accredited. Their website has a handy and simple ‘Find an installer’ function. After using this tool, do further research and check reviews of installers before going ahead. A good installer will design a system that suits your house and energy needs and provide value for money. 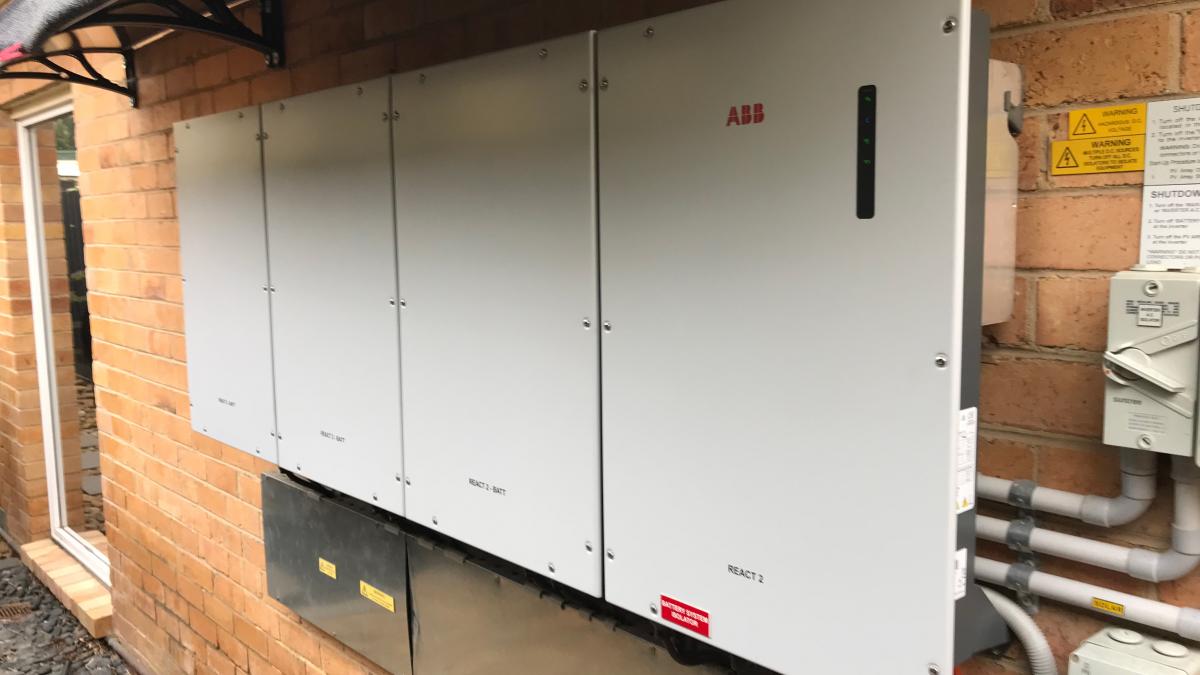 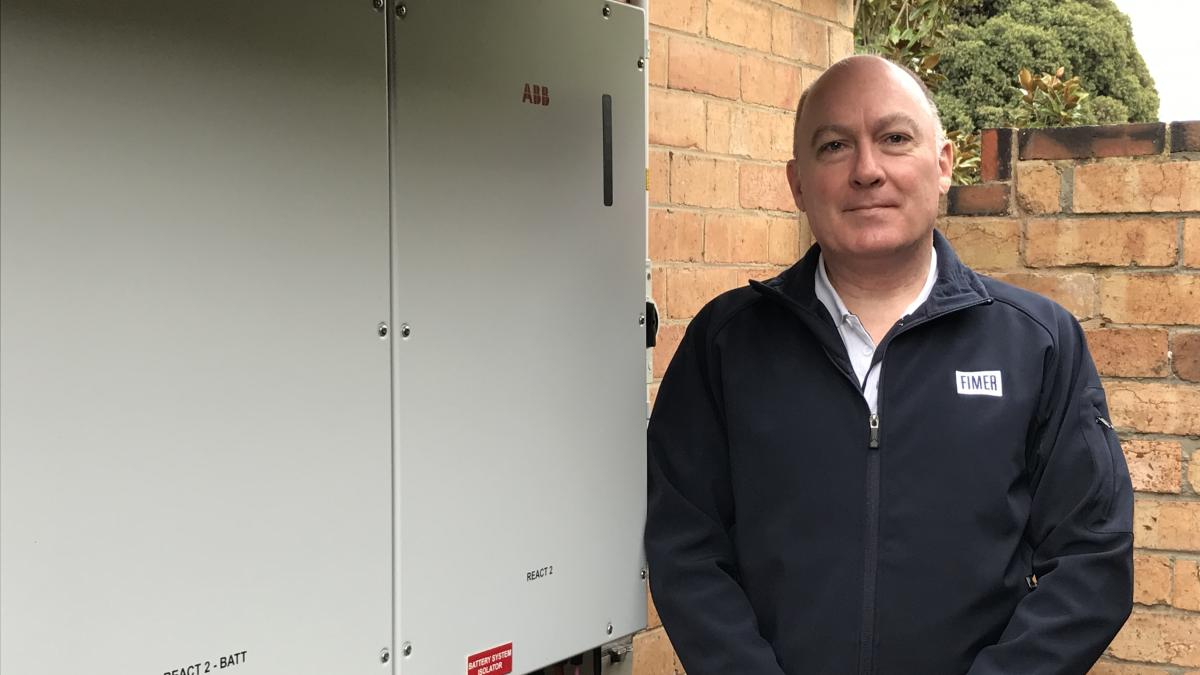